In The Spotlight: Anna Prussian & The Medvejie Solstice Run

SHS sophomore Anna Prussian is looking forward to the 2021 Medvejie Solstice Run. While she’s been running track in Sitka since the sixth grade, Anna actually began running in Coeur d’Alene, Idaho in the second grade.

SHS sophomore Anna Prussian is looking forward to the 2021 Medvejie Solstice Run. While she’s been running track in Sitka since the sixth grade, Anna actually began running in Coeur d’Alene, Idaho in the second grade. She and her family moved to Sitka in 2013 when her mom, KK Prussian, got a job as a hydrologist with the Forest Service. 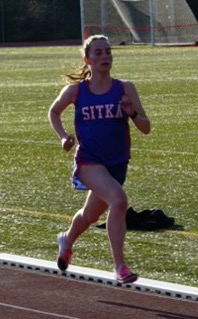 These days, says Anna, “My main event is the 2-mile and then, I am also on a 4×8 team.” The runner describes the 4×8 as a relay race with teams of four people, in which, “Each person that you hand off to runs 800 meters, which is two laps around the track. I also run the mile.”

Although this will be her first time in the Solstice Run (which was cancelled in 2020 due to Covid), Anna speaks very highly of the SHS track and field program and the folks who coach – Shasta Smith, who coaches distance events and Jeremy Strong, who is head coach and also coaches sprints.

Now in its 15th year, the Solstice Run is an annual event to benefit the SHS track and cross-country teams. KK is one of the parents on the committee putting together the 2021 event. She noted that the race has consistently generated at least $1,000 to put towards the teams.

The Run course was modified when Sawmill Creek Rd. was being re-constructed a couple of years ago. Construction inhibited the use of the highway and the race was moved to the dirt road beyond the Beaver Falls trailhead parking. While runners considered the new course more difficult, they really liked the gravel (versus pavement) surface. The race, noted KK, has remained in this location ever since.

This year’s Medvejie Solstice Run will take place on Saturday, June 19 at 9am. The three distance events will begin and end at Herring Cove, adjacent to the Beaver Lake Trailhead parking lot at the end of Sawmill Creek Rd. All races will head out toward Medvejie Hatchery and back. The 1/2 marathon turn-around is at the Green Lake Power House; 10K near the Medvejie Hatchery; the 5K at about half-way out to the hatchery. Solstice Run organizers describe the course as hilly and urge contestants to train accordingly.

Volunteers are warmly invited to support the event. For more information call Jenn at 738-6635.

In The Spotlight: WhaleFest & SSSC