In The Spotlight: Armchair Travels May 2021

In 2013, Sitkan Michael Mausbach traveled to Thailand and spent five months there, during the “hot season” from January to May.

In 2013, Sitkan Michael Mausbach traveled to Thailand and spent five months there, during the “hot season” from January to May.

Known until 1940 as “Siam” Thailand is (per Wikipedia) “…located at the center of the Indochinese Peninsula…bordered to the north by Myanmar and Laos, to the east by Laos and Cambodia, to the south by the Gulf of Thailand and Malaysia, and to the west by Myanmar and the Andaman  Sea…Throughout the era of Western imperialism in Asia (Thailand was) the only nation in the region to avoid being colonized by foreign powers…”

The 2013 adventure was a solo one for Mausbach, which he embarked upon as part of an independent research project connected with his undergraduate thesis. During his time in Southeast Asia, he also spent two weeks in the (historically fraught) nation of Cambodia. Mausbach’s particular interest, though, lies in Thailand’s role as a (subjugated) ally of Japan during World War II and the cultural memories of that time.

“Over the course of my undergraduate studies, I developed an interest in the ‘politics of memory’ – specifically how and where memory is explored in a dynamic way. My faculty advisor had lived in Thailand and was a fluent Thai speaker. I also became deeply interested in the Japanese role (in Southeast Asia) during World War II.”

Wikipedia describes the “Death Railway” as a 258-mile railway between Thailand and Burma, “built by the Empire of Japan from 1940–1944 to supply troops and weapons in the Burma campaign of World War II.” Construction was completed using forced labor and resulted in the death of 90,000 Southeast Asian civilians and more than 12,000 Allied POWs.

When I asked Mausbach to tell me more about the “Death Railway” he said he became fascinated with “what went into the story of The Bridge on the River Kwai and why America became so invested in this story. It became like a kind of rabbit hole for me – this particular episode in history.”

“Going into it, I was using my research as (an entry point) for this facet of World War II that is often overlooked. So much of Thai tourism (these days) is oriented toward the beaches of the south, whereas I spent most of my time in the central Thai province of Kanchanburi.” 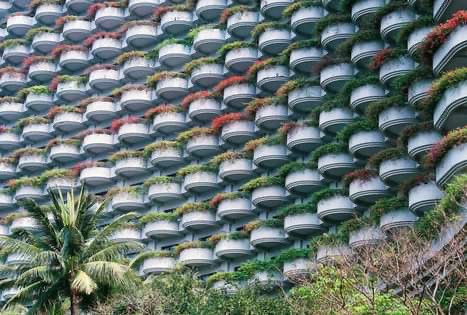 “I took this photo of the building because the color gradient was beautiful, and Bangkok is full of overgrown buildings.” – Michael Mausbach

Kanchanburi (again, per Wikipedia) is home to one of the most well-known parts of the railway… Bridge 277, the so-called ‘Bridge on the River Kwai’ built over the Khwae Yai River.

Mausbach also told me a bit about his background and how he came to live in Sitka. “I went to Evergreen State College in Olympia (Washington) with Margot (O’Connell) and got my undergrad degree in Global Studies and International Relations, with a minor in cultural analysis. Then, after SE Asia, I took a seasonal job with the Science Center, and have been in Sitka ever since.”

These days, his day job is as the Manager of Business Operations and Human Resources for Sitka Salmon Shares. He also serves on the Sitka Health Coalition and the board of the Sitka Sound Science Center.

Where does Mausbach see himself in the future?

“I had originally thought of academia, but now more and more I see myself moving into economic impact work, work that honors human resilience, and helps ensure that communities are resilient – economically and culturally.

On Thursday, May 13th the public is invited to hear Mausbach share stories and photos from his travels in Thailand, where he spent time researching the politics of memory and military ruination along the Death Railway. This event is part of Sitka Public Library’s Armchair Travels Speaker Series and will be held via Zoom. The registration deadline is 12pm on May 13th. For more info. or to sign up, please call 747-4020 or email margot.oconnell@cityofsitka.org.

In The Spotlight: WhaleFest & SSSC