In The Spotlight: Lucy Poulson & SFAC

Lucy Poulson has been close to Sitka Fine Arts Camp her whole life. A lifelong Sitkan, she attended the camp from kindergarten through 12th grade; now, as a senior at Harvard, she’s returning to SFAC for the summer as its Development Assistant.

Lucy Poulson has been close to Sitka Fine Arts Camp her whole life. A lifelong Sitkan, she attended the camp from kindergarten through 12th grade; now, as a senior at Harvard, she’s returning to SFAC for the summer as its Development Assistant. In 2022, she wants to find out: “What makes this camp somewhere people want to come back to year after year?” 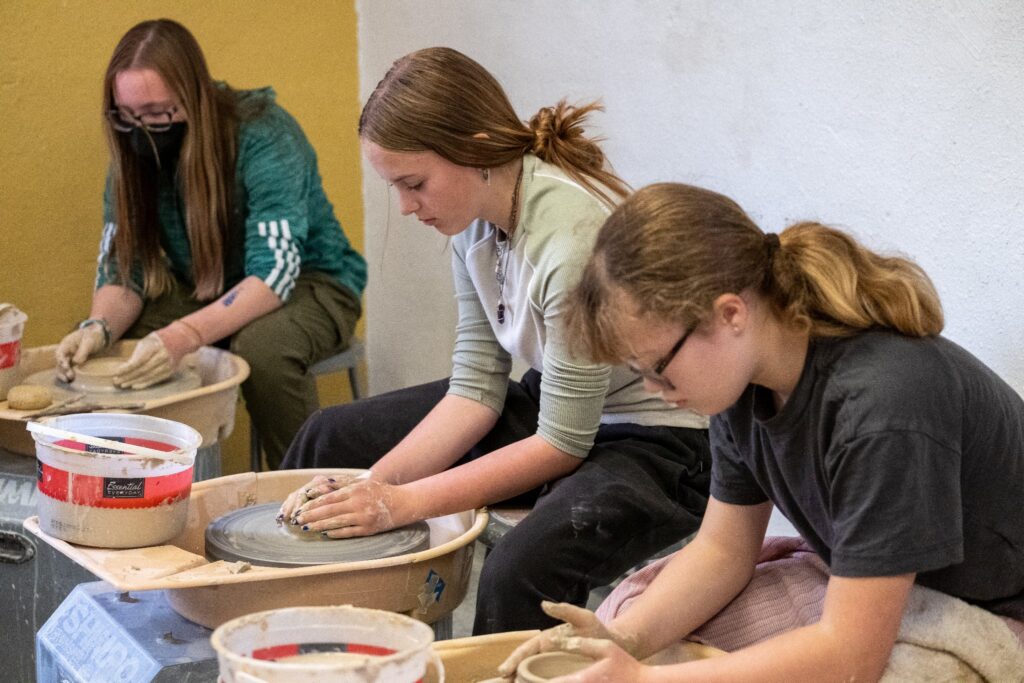 Sitka’s summer arts camp serves elementary, middle and high school students. This June – during middle school camp – Lucy is interviewing campers, counselors and faculty. She then publishes their stories in the camp’s digital newsletter. A common sentiment from campers, she chuckles, is that “camp is like school, but only the electives, so it’s like ‘fun-school’.” Middle and high school campers take five classes daily, which they select from a catalog covering many artistic disciplines. Several have shared with Lucy that they’re using camp to explore art forms new to them, through classes like Improv, Printmaking and Darkroom Photography.

This exploration mirrors Lucy’s own SFAC experiences. As a camper, she made it a point to “push” herself by choosing classes over a range of disciplines. She found one pottery class particularly memorable; “Pottery was nothing that I was very good at, but it was fun just being in a space that was so safe…It was okay to be the worst in the class, and you still felt valued, like you were part of the community, like you were creating something. That’s one reason why I wanted to keep coming back. Wanting to be part of that community.” One of this year’s first-time campers told Lucy that SFAC “feels like a community” to him already.

Lucy credits SFAC’s sense of community largely to the energy and compassion of staff and faculty, who “definitely practice what they preach” about creating positive experiences for everyone. Another “camper-turned-employee” mentioned faculty and staff as a major reason for his return to SFAC, saying, “They developed me into exactly who I wanted to be every year.” Also key, says Lucy, is the extensive work that goes on “behind the scenes” – from assembling dorm furniture to preparing food in advance to last-minute tidying-up. Something as seemingly minor as fixing peeling trim or vacuuming a dusty room can be one of “the small details that go a long way towards making everyone’s experience that much better.”

SFAC’s newspaper archives show that it’s taken hard work – like securing sponsorships from local businesses – to keep the camp operating since its 1973 founding. Younger Sitkans may find it “easy to forget sometimes” that SFAC has existed for nearly 50 years, Lucy points out. There have been many changes over the years; for instance, the organization now operates year-round, with additional programs like Young Performers Theater and Summer Teacher Institutes. But there’s something about SFAC that hasn’t changed.

“It’s always been a place where (people) want to come,” Lucy emphasizes, musing about the talented young people and famed artists who have flocked to camp over the years. “And I think it’s lasted. And I think it’s aged well – and adapted well.”

In The Spotlight: The Sitka Food Co-op

In The Spotlight: Dixon Elegant